On eve of Martin Luther King’s Day, workers from across industries united to demand Workers Commission 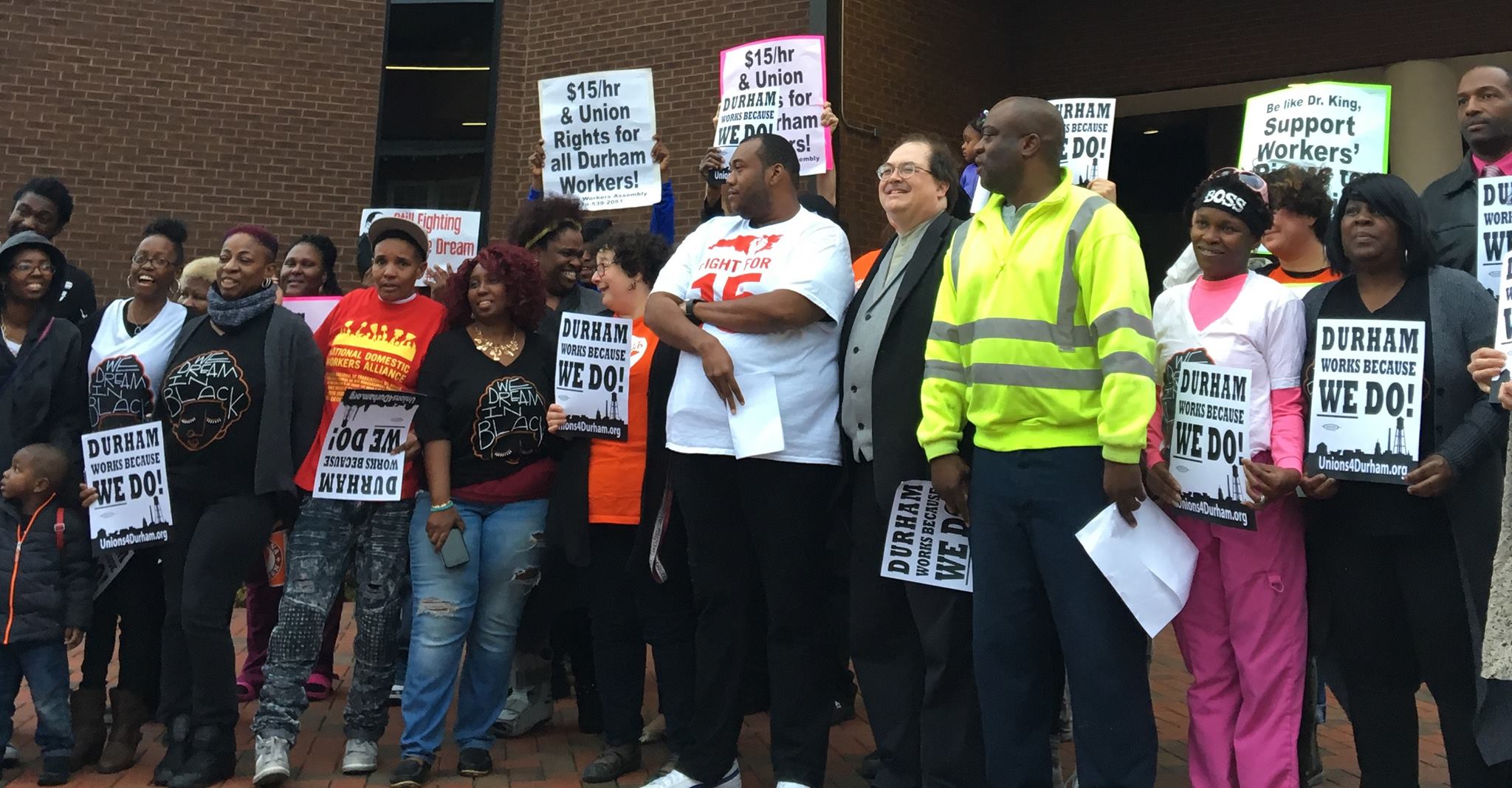 Durham, NC—At 4PM on Friday, January 12, more than 40 workers and community allies gathered in front of City Hall to launch a city-wide campaign to unite working families for better working and living conditions in Durham.

At the rally, Daryl Brunson, solid waste equipment operator with the City of Durham and a UE150 steward spoke. “This past summer, a city worker in Charlotte was killed from heat-related illness after working overtime in the summer heat,” he said. “We are fighting for a safety policy to protect against this.”

The Durham Workers Assembly made their public launch after months of meetings. According to organizers, they timed the public launch for the Friday before Dr. King holiday because Dr. King’s Poor People’s campaign had at its heart the fight against economic and racial injustices, which included core union rights, many rights we are still fighting for today in Durham.

Priscilla Smith, leading member of the Durham chapter of National Domestic Workers Alliance – We Dream in Black Chapter, stated “we are here fighting for living wages because the cost of living is continually rising but our paycheck are not rising with it. The world says you are not doing your part if you don’t go to work and pay taxes, but we are doing that and are still not able to support our families…They say raise your children but how can you when you have to work so hard and long to provide a roof over their heads and put food on the table?”

Cathy Shuman, an executive board member of the SEIU Southern Region-affiliated Duke Faculty Union also spoke at the action: “Our coalition unites workers from different neighborhoods, different races, and different industries. We’re fast food workers, home care workers, maintenance workers, transportation workers, and teachers, like me,” she said. “Together, we’re sharing our struggles and sharing our power, taking our efforts to local employers and elected officials.”

The Durham Workers Assembly will be organizing worker speak-out forums as a space for workers across the city to address common workplace issues. The next event will be on February 1st. It will be the first forum where several city council members are expected to make an appearance.  The press is invited to attend to hear stories of local worker organizations.

The coalition campaigning for a Durham Workers Commission is being organized by the Durham Workers Assembly which includes unions, community groups, and worker activists who are dedicated to making Durham a better place to live and work including the which is composed of Raise Up for $15, Durham City Workers Union chapter of U.E. local 150, graduate assistant and adjunct faculty members of SEIU Southern Region at Duke University, N.C. A.F.L.-C.I.O, National Domestic Workers – We Dream in Black and many non-unionized workers from across Durham.