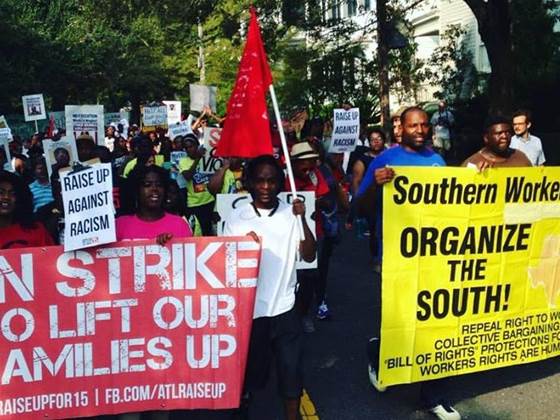 We call on all people of conscience, people who love their families and their communities, people who believe that every worker deserves dignity and respect:

Boss Trump’s regime has shown in its first year and a half what they are all about: attacks on working people’s healthcare, raids and deportations, more wars and increased attacks on worker right’s to organize.

WE MARCH FOR:
• A Workers Bill of Rights for all Workers!
• Workers Rights Commission in Durham now!
• $15/hr, a union and collective bargaining rights for all workers, including incarcerated workers!
• Housing is a human right – End the eviction crisis now!
• An end to raids and deportations! Stop all check-points!
• ICE out of everywhere – Sanctuary cities, schools, neighborhoods!
• An end to racist police murders and brutality – Police out of our neighborhoods and schools! End excessive funding for police and prisons! Police accountability and community oversight
• An end to wars abroad! Cut funding for Pentagon and NATO to fund the people’s needs! No to militarization of the US southern border!
• Tax the Wealthy and Corporations, not Workers! Fully funded public jobs program and all public services! NO budget cuts!
• An end to rape culture & violence against women and LGBTQ people
• Defend Clean Water! Environments free from all pollutants such as dumpsites, hog farms and destructive pipelines. Stop corporate control of food systems, through GMO’s and FDA manipulation.
• Free and appropriate healthcare including reproductive and mental healthcare for all.
• Fully funded public schools including full-time teacher assistants, nurses and social workers as well as specialized art, music, world language and P.E. educators
• An end to the school to prison pipeline and a funded implementation of restorative discipline practices
• The right to build political & people’s power in the streets and at the ballot box

We invite others to join this call!

A GLOBAL ACTION
On the eve of the 50th anniversary of the assassination of Dr. Martin Luther King, Jr. we remember what he taught us – the triple evils of POVERTY, RACISM and MILITARISM are forms of violence that exist in a vicious cycle. We must fight them all at once on a global basis. It is no longer possible for the workers and the oppressed to conduct our struggles on a solely local basis. The changes in global capitalism have made it both necessary and far more possible for the struggle to be waged on a globally coordinated scale. John Bolton being elevated to be Trump’s National Security Advisor only creates more likelihood of strike-first wars abroad, including renewed threats against Syria and Russia. And recently, over 1,000 Palestinians were shot in peaceful protests demanding the right to return.

Boss Trump’s tax plan was a massive shift of wealth away from workers and into the hands of corporations and the wealthy. While simultaneously increasing military spending to $700 billion, state and federal budget cuts loom on the horizon, gutting vital social service programs. The tariffs projected for steel and aluminum blame workers abroad and will only result in further job cuts. The looming Supreme Court decision on Janus vs. AFSCME, could turn the rest of the country’s public workers into right-to-work open shops.

At the same time, we salute the rank-n-file education workers who have built statewide strike actions in West Virginia, Oklahoma and Arizona. This type of bold mass action has lots of lessons for all working people. We say: make the banks and energy corporations pay!

The attacks on the DACA program, threats of militarizing the southern border, and ICE raids have intensified the terror facing immigrant families. On April 11, ICE conducted raids across the country, locally they detained 6 undocumented immigrants in Orange County, NC.

Durham is facing an evictions crisis, where over 1,000 families get evicted every month. It’s our bosses that are gentrifiers, that are making super profits off our misery and displacement.

The Trump administration continues to promote the devastating Keystone XL, Dakota Access and Atlantic Coast pipelines, one of which cuts through our own state, while also threatening to totally gut the EPA and its environmental protections. Sexual violence continues to happen at epidemic levels in the U.S., and women and people who are Black, Latinx, indigenous, queer, and transgender are at highest risk.

We invite all working people, students, immigrants, Muslims, mothers, trans and queer workers to unite in action on May Day!

We welcome mass protests against Trump, racism and sexism, and encourage mass action to support workers, immigrants, Muslims, women, queer and trans folks. These mass protests are a sign that millions are becoming woke. We support building an independent resistance led by workers and the oppressed of the planet. We commit to building together with all independent progressive forces to face down global capitalism and wars and rid the world of poverty, hate, and oppression once and for all.

We call on all local organizations of working people to send your endorsements for the 2018 May Day action to durhamworkersrights@gmail.com

Onward to May Day Mass Day of Action!