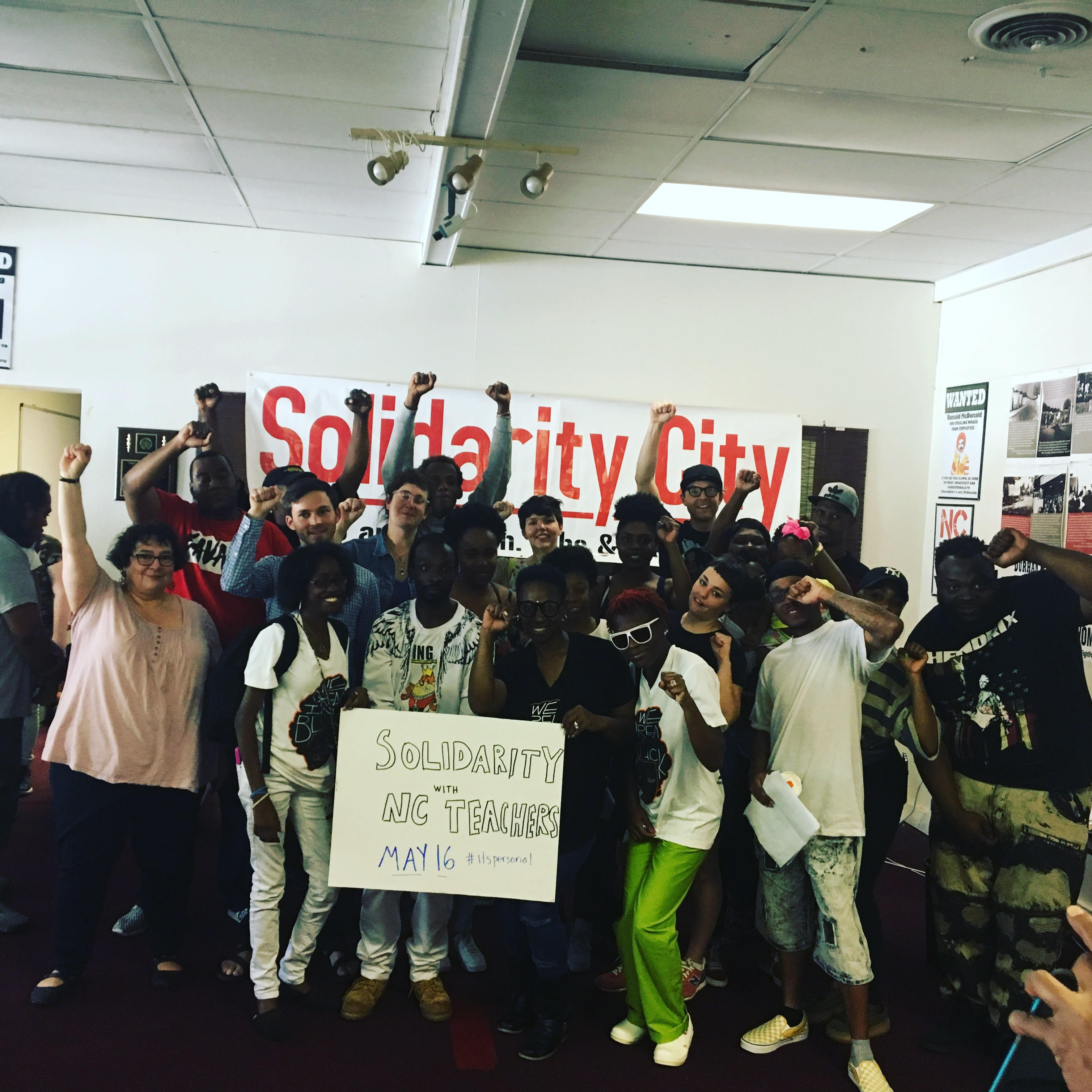 Deepen the workers  struggle, strengthen our unions and fight against budget cuts!

Southern Workers Assembly sends solidarity to North Carolina education workers and their union! On May 16, teachers are taking personal days to mobilize by the tens of thousands to march on the General Assembly in Raleigh.  North Carolina teachers and school workers are following the bold example of walkouts and strikes by education workers in West Virginia, Oklahoma, Kentucky, Milwaukee, Colorado, Arizona, Puerto Rico, and elsewhere. An intensifying period of fightback is being inaugurated that is expanding consciousness and changing the terrain of struggle for all workers.

These courageous actions led largely by multinational women workers, are the result of  years of devastating austerity, cutbacks to public education and services, and the deprivation of vital resources from our communities. Instead of fighting for workers, politicians from both parties would rather give handouts from big business and billionaires. Students, parents, the community, and other worker organizations have shown incredible support in this moment of resistance. It’s clear that working class people are fed up with cutbacks and are laying the basis for a broader, class-wide struggle against austerity and for the needs of our communities.

Workers in the South and in so-called “right-to-work” (for less!) states have played a leading role in this rising tide of resistance, which has brought a new dimension of rank-and-file-led militancy to the labor movement. In most cases, the walkouts and strikes that are taking place are technically illegal according to the letter of the law. That has proven no obstacle for the determination of workers engaged in struggle together, demonstrating that workers in motion can profoundly and quickly change these dynamics of power.

In addition to being a “right-to-work” state, it is illegal in the state of North Carolina for public workers to collectively bargain with their employer. NC General Statute 95-98 was signed into law in 1959 by an all-white legislature during the time of Jim Crow segregation and major human rights violations in the United States. This law was passed during the rise of the Civil Rights movement, and at a time of organizing among the largely Black public workers. The NAACP has deemed NCGS § 95-98 to be North Carolina’s last Jim Crow law.

In March 2007, the UN’s International Labor Organization (ILO) found North Carolina’s ban on collective bargaining to be in violation of international labor standards after NC Public Service Workers Union UE Local 150 organized a series of public hearings across the state. In that decision the ILO called on the United States government to “promote the establishment of a collective bargaining framework in the public sector in North Carolina” and called specifically for the repeal of NCGS § 95-98.

Big business and the politicians that do their bidding in states across the country study the anti-labor laws in North Carolina and the South in an attempt to introduce them in an increasing number of states. A prime example of this is the notorious Art Pope, multi-millionaire owner of Variety Wholesalers. Pope has used his fortune to advance his racist, anti-worker agenda in NC, and increasingly across the country. IN NC, he played a major role in engineering the resegregation of Wake County Public Schools – which was defeated by high school students in alliance with community forces – and in the right-wing takeover of the NC Legislature in 2011. He was later installed as the NC Budget Director, and oversaw a host of draconian cuts to public education and services. Pope’s agenda has been met with massive opposition.

It is also significant to note that he sits on the board of the Bradley Foundation, a far-right organization based in Wisconsin that played a pivotal role in Governor Walker’s attacks on working people there and in pushing his agenda in many other states, in addition to other far-right organizations.

In recent years, major banks and energy corporations headquartered in NC like Bank of America and Duke Energy have reported record profits, while these same corporations have foreclosed on our homes, raised our energy rates year after year, polluted our communities with toxic coal ash, and much more. In addition to the wealth handed to these corporations by the NC legislature, they are also the major beneficiaries of the Trump tax cuts.

In Charlotte alone, the third largest banking capital in the U.S. – known as Wall Street South – there is a total of $2.26 trillion in financial assets between Wells Fargo, Bank of America, and other financial and corporate institutions. This enormous wealth is the product of exploitation of working class people.  Teachers, custodians, bus drivers, city workers, and laborers in all public sectors continue to break their backs building society for the rich, while the wealth we create is concentrated into the hands of a increasingly smaller group of elites at the top.

The main concern of these politicians and legislators, who are in league with banks and energy companies, is their bottom line. They would rather see us starve our children and communities than pay us living wages and fund people’s needs. It’s in their best interest to keep us below the poverty line, sick, and often too tired to fight back. But things are changing. We are following the inspiring example of educator unions all across the country, and especially in the South where most states are right-to-work. We’re encouraged by other rank-and-file workers who are pushing to make their unions fight and take more progressive and class consciousness positions. Worker organizations in the South, with education workers at the forefront in this period, have spread their energy like wildfire, and the results have been nothing short of astounding. When we move together, we see that real change is possible.

The Southern Workers Assembly affirms our support for the rank-n-file members in this historic battle, and urges you to continue to build your unions.

The conditions of NC and many Southern states forces unions into a different relationship with the decision-makers. In the days as we await the Supreme Court decision on the Janus case, which would effectively make public sector workers in all states right-to-work, we are reminded that even workers in the RTW states, concentrated in the US South, can build their unions, fightback and win. The type of mass rank-n-file action displayed by North Carolina educators is an example for us all to follow.

What is the Southern Workers Assembly?

The Southern Workers Assembly (SWA) is a network of local unions, worker organizations, and organizing committees, committed to building rank-and- led democratic social movement unionism (unionism with a social justice agenda, led by and accountable to the rank-and- file) as a foundation for organizing, uniting and transforming labor power throughout the South.