INDY WEEK: Durham Workers Are Coming Together To Demand More Rights and Protections from Their Employers 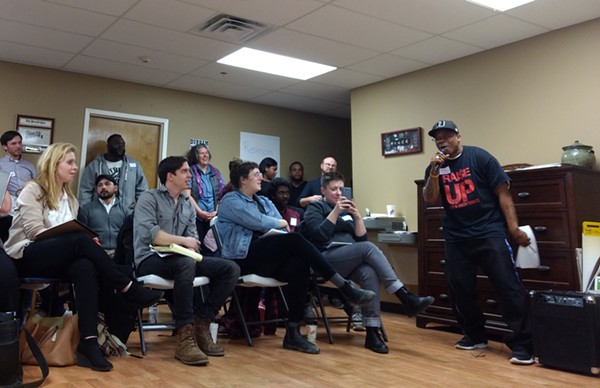 Read the article as it appeared in the Indy here

Labor groups in Durham are uniting to demand more rights and protections for workers in the Bull City.

The Durham Workers Assembly, as the collective is known, met Thursday night to share stories of abuse in the workplace and draft a Workers’ Bill of Rights to present to the City Council along with a request to establish a Workers’ Commission. The initiative was started by Raise Up for $15, the Durham City Workers Union chapter of U.E. Local 150, graduate assistant and adjunct faculty members at Duke University, the N.C. A.F.L.-C.I.O, and the National Domestic Workers Alliance.

Part therapy, part brainstorming session, attendees who spoke about their own experiences at work were moved enough — whether by anger or camaraderie — to diverge from prepared remarks. They spoke about low wages, inconsistent hours, injuries on the job, and missed time with their families.

“We don’t need a commission, we’re demanding that shit,” said Eric Winston, with
Raise Up for $15, part of the national Fight for $15 movement to raise the minimum wage. “We need to get angry. We’re too nice with these people.” Winston said he works three jobs to support his family, including an elderly mother and sick relative, and rarely has time to spend with his children.

Lurika Wynn, with the National Domestic Workers Alliance, also went off-script speaking about her fifteen years as a home health care worker. Although there is “beauty in the work” of taking care of others, some of her colleagues make less than $9 an hour, she says, and sometimes will show up at a client’s home only to find the client isn’t there.

“It’s very clear not much has changed,” she said.

M.J. Sharp spoke about the challenges Duke faculty members met trying to form a union, which they did in 2016.

“If you work in this country, you are increasingly vulnerable to being nothing more than a line item on somebody’s budget,” she said.

The Assembly brings workers together to not only share their experiences, but train to organize their workplaces. Ultimately, the group will be asking the city to form a Workers’ Commission to hear about issues with local employers and for the city to support a Workers’ Bill of Rights, safeguarding things like reasonable, consistent hours, living wages and benefits. “This is all a big experiment,” said Dante Strobino, an organizer with U.E. Local 150 and the Durham City Workers Union, which is crafting a Bill of Rights specific to city employees.

“Workers are the authorities. Workers know what they need on the job. They know what the problems are,” he said.

Strobino recognizes that the city is limited in what it can do to compel other Durham employers to meet the group’s wishes, which include higher wages, a right to collective bargaining and strong anti-discrimination policies, because of state law. But with enough support — from workers and a new, more progressive city council — the group could put pressure on companies to put into place policies in line with the demands that would be outlined in a Workers’ Bill of Rights.

“I can’t say employers are any nicer than anywhere else, but the momentum here is strong. We want to be the example for the state,” Strobino says. “We’re not there yet but we’re on the verge of something.”

The Assembly meets the first Thursday of each month. Later this year, they’ll hold a Workers School to train employees to organize their own workplaces. As part of some worker-centered budget demands, the group will also ask the city to partner with it for a study on the state of workers in Durham. Last year, the People’s Alliance and Fight for $15 released a report in this vein that showed one in four Durham workers earned less than $15 per hour.

Mayor Steve Schewel, who attended Thursday’s gathering along with city council members Jillian Johnson, Vernetta Alston and DeDreana Freeman, said he thinks that’s a good starting point for the city to see what it can do to improve the quality of life of workers in Durham. Schewel is a member of the Duke Faculty Union (he also founded this paper and sold it in 2012).

At the start of the meeting, attendees were asked to find someone in the room who worked in a different field and discuss what changes they want to see in their workplace. Schewel didn’t share any complaints about his fairly new job at the city’s helm, but heard from a woman concerned about low wages and unsafe drinking water at her job in Butner. He said he supports the formation of a commission to hear such concerns and thinks it can be done, but wants to “make sure people understand what it can and can’t do.”

“What I took away tonight was the stories of people who are in very difficult employment situations,” he said. “They’re precarious oftentimes, they are underpaid, they are without benefits. Those are things that need to change and I totally believe in the organizing that the folks in here are doing.”