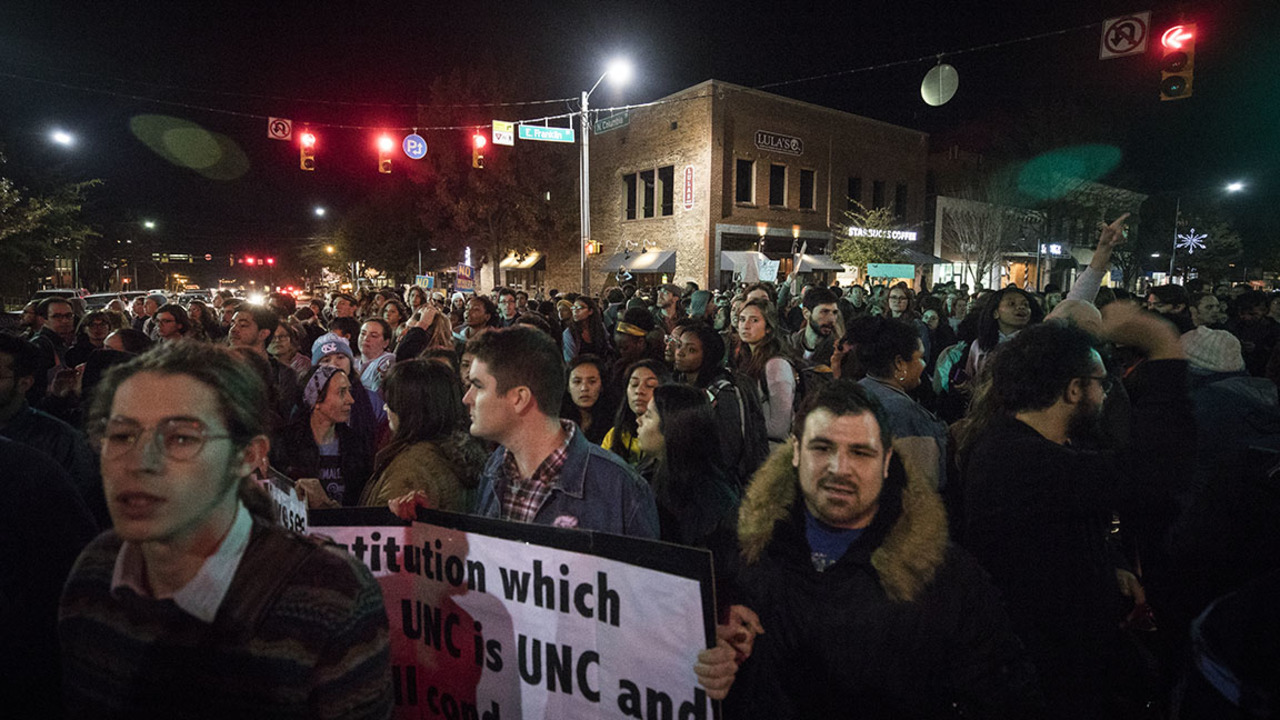 In response to the Board of Trustees decision to re-enshrine Silent Sam, a fundamentally hateful and racist monument to war criminals and enslavers, graduate worker-activist, Maya Little, and others at UNC have called on all UNC TA’s and faculty to withhold grading final exams or assignments for the 2018 Fall semester until the following demands are met:

We stand in total solidarity with the non-violent anti-racist protestors that have experienced police brutality or been arrested.  We stand in total solidarity with workers exercising their constitutionally protected rights to stand up for one another and their community. We call on the Orange County District Attorney to drop the charges against those anti-racist activists who were arrested at the protest on Monday, December 3.

This $5.3 million shrine to racism is being proposed at the same time that Hurricane Florence survivors, still tens of thousands of people without adequate housing, are being told they must wait for assistance.   This is at the same time that the General Assembly is writing into the state Constitution an artificial 7% cap on income tax for the wealthy, further draining our state of vital resources for needed public services.  This occurs at the same time the state refuses to expand Medicaid saying it can’t afford it!

On August 20th, 2018, a group of UNC students, workers, and community allies took to their campus and toppled the prominently located Confederate statue known as Silent Sam.  This brave direct action was a last resort after generations of UNC administrators actively dismissed decades of widespread student, worker and community measures to remove the statue through every possible institutional channel. Though those rallying around Silent Sam have defended it as an innocent and honorable symbol of “heritage”, the statue was funded by the United Daughters of the Confederacy, an organization that lauded confederate soldiers as “the real Klu Klux Klan.” In the statue’s 1913 dedication speech, white supremacist Julian Carr celebrated the Confederacy’s defense of the purity of the “Anglo Saxon race” and bragged of how he “horsewhipped a negro wench [who] rushed for protection to these University buildings where was stationed a garrison of 100 Federal soldiers” to establish the statue as opposing the very presence of Black lives on campus.   Silent Sam has always been a blatant symbol and agent of the white supremacist racial order that holds the people of North Carolina in chains. Its presence served as a constant, looming reminder that the state and white supremacist society have actively sought to exclude Black people from the UNC community. Given this history, the Durham Workers Assembly wishes to voice our collective support for the dismantling of Silent Sam and the disruptions of white supremacist rallies around the statue in the weeks that have followed.

Since Silent Sam was pulled down down in late August, the antiracist struggle has continued. In the past few weeks, UNC administration has directed both its own and outside police officers to engage in shocking displays of mass police brutality as workers, students, and community allies have been attacked and arrested en masse, while Neo-Confederates staging actions around the statue have been physically protected by police.

Despite the efforts of the UNC administration to welcome their allies on the far right into our community with their dog-whistling statements and their orders to campus police to target anti-racist protestors, the truth is white supremacy will never be welcome to the workers and students of UNC.  We of the Durham Workers Assembly, a group of workers and community members in Durham stand in total solidarity with the community’s efforts to model a positive and inclusive ideology as an alternative to that of the administration. DWA and the communities that compose it include many workers and students of color who should not have to endure active white supremacist presence in the spaces where they live, learn, and work. UNC workers, many of whom are Black, continue to endure low wages, unsafe working conditions, and toxic disrespect from the institution, all while Chancellor Carol Folt sits atop a salary of over $600,000 dollars a year. More broadly, we recognize that time and time again, all workers in North Carolina have been held down by racist divisions that prevent us from unifying as one strong community. We understand the struggle surrounding Silent Sam to be symptomatic of much deeper issues with regards to how the university and our greater society aims to uphold the humanity of some groups at the expense of others.

Support the Chapel Hill anti-racist activists facing criminal charges for their participation in demonstrations against white supremacy at the University of North Carolina at Chapel Hill, including the toppling of the Confederate monument Silent Sam, by donating to the Anti-Racist Activist Fund here.